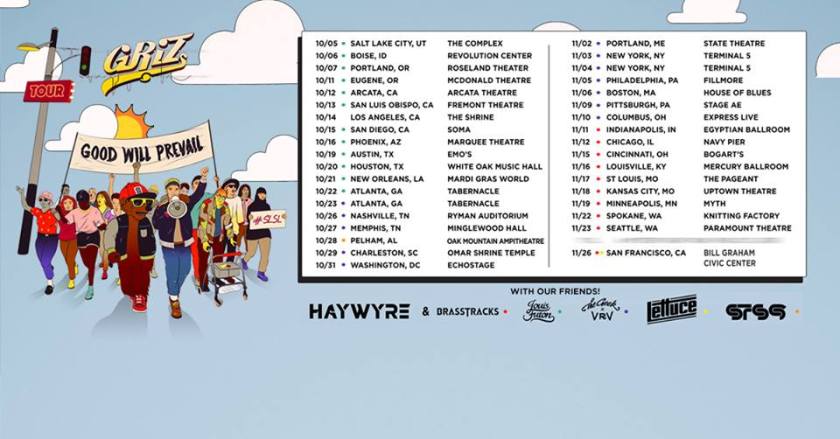 Over the last few weeks the sax god himself, Grant Kwiecinski, (better known as GRiZ) has been taunting us by dropping new tunes of his latest album titled “Good Will Prevail” preluding his fall tour that kicks off with his much anticipated headlining slot at the one and only Red Rocks Amphitheater on October 1st.

The album begins slow and easy with “Wicked” featuring Eric Krasno on the vocals. This tune takes you back to sound of Zeds Dead circa 2012 with a brass twist thrown in.

Next, you’re pushed right into the rock n roll funk we all know and love with “Can’t Hold Me Down”. This tune showcases the heart racing drop build up, followed by a dark and dirty bass line we are all used to from an typical EDM tune. But it’s GRiZ, so don’t take the term typical to mean average.

Imbedded with those Detroit, Michigan roots, you can always expect a lil’ rap, a lil’ hip hop. ProbCause lays down the lines on My Friends and I. This dude is not new in live electro scene. You can see him featured on tracks with anyone From Big Gigantic to Gramatik to Chance the Rapper.

With the next two tracks, he brings us back to the familiar. “I Don’t Mind” gives those old school, day one, Grizmatik vibes featuring veteran collaborators iDA Hawk, Susquabi and Artifakts. Lighter on the bass, yet heavy on the funk, placing you in a bright, sunshiny mental state. (FYI: Artifakts is an up and comer, opening for artists like the one and only Pretty Lights check him —> https://soundcloud.com/artifakts )

Then comes the crowd favorite collaboration. This Colorado-based duo will forever make an appearance on any Griz album. Big Gigantic, GRiZ, and Gramatik are the dudes who are turning simply pressing buttons into something uncool. More and more kids are being drawn in this direct because they want more than  a push play set with a non-stop continuous beat. This track gives you that big sound, powerful woman attitude you get from “It’s All good” off Say It Loud.

If you want a feel good, soothing tune that’ll melt your insides like butter, click to track six “Feelin’ Fine”. This song’s influence is definitely the product of being under the influence of that Colorado legality.

I’m not a huge Cherub fan. In my opinion, they’re whack. But that is simply my opinion which holds zero validity. Fun, stanky tune, but not my fav. Not the kind of GRiZ I boogie my ass off too.

Towards the end, comes the track that puts the cherry on top on his latest collection of musical art. Leo Napier’s (Orlando Napier) voice was made to be placed over Grant’s production. It’s soulful, and quietly electrifying. His pipes first sent chills down my spine when I heard him on “Turnin’”.

Overall, YGG GRiZ, you did the absolute most. He brought us soul, hiphop, dubstep, funk. He gave us hype with “Rather Be Free” he gave us peacefulness with “Gotta Push On”. He hit everything he possibly could and then some. To the man himself: we thank you for always keepin’ it real and funky. We all thank you for the insane amount of amazing music you continue to put out. I have no idea how he does it on top of his endless festival dates and non-stop touring, but its the farthest thing from half ass. It’s incredibly well thought out from start to finish. He hasn’t just quit once he reached the top, like many artist who resort to only giving their fans only lame, people pleasing bangers. You remain at the top of my list.

To listen for yourself hit that link: https://soundcloud.com/griz/sets/good-will-prevail-1