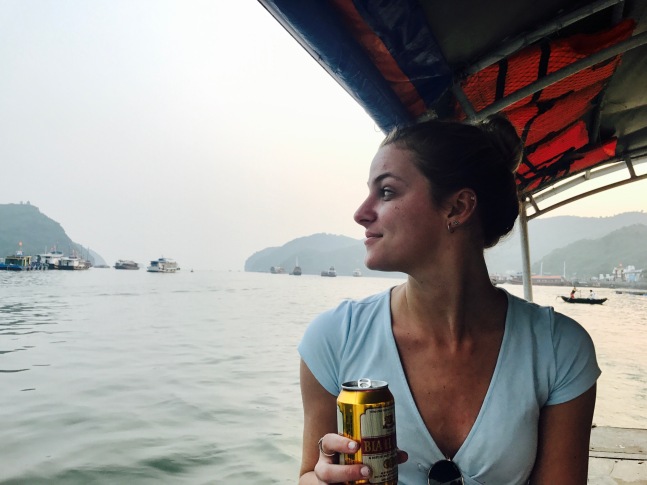 Luckily, we found ourselves with a quick break from school soon after we arrived. After a half day of training, we packed our bags and headed to the airport to make our way Hanoi, Vietnam. To say out loud, “I’m going to Vietnam”, is super weird. Growing up, all you heard of regarding Vietnam was the war. Certainly not a leisurely weekend getaway. This is what travel does to you. It breaks down a conception, and replaces it with the reality. I now think of something completely different than protesting hippies and old photos of my grandfather in his uniform.

Our flight was slightly delayed which was no biggie, but I have never been so cold in my entire life as I was on that plane. I looked like a crazy person with both my arms and legs tucked into my black body con dress.

All U.S. citizens need a visa to enter the country. The process wasn’t too bad. After about an hour or so of waiting and filling out a form stating the entirety of my life and family, we were ready to be on our way. We stayed tucked down a little alley way in the Old Quarter neighborhood of the city at the Old Quarter View Hostel (highly recommend by the way!). We arrived around midnight, completely beat. There was about 100 people in my room, with a naked 60 year old man snoring his life away in the bunk below me, but the best was so comfy! I could’ve lived in it. I would trade that twin size mattress for the cardboard queen I have in my apartment. You can’t beat $6 a night including free hot breakfast and free toothbrush. I can’t barely buy a crap toothbrush for $6 in the U.S.

The next morning, we had to be up bright and early for our bus ride to Ha Long Bay. Everything since I left the states has gone so smoothly, so clearly some slight scares where in store. We waited right outside our hostel on the street corner for our bus to arrive. It was five minutes past our schedule pick up, so I ran back in to use the WiFi to see if they had tried to contact us. OF COURSE, they had sent me an email, stating they were at our hostel, couldn’t find us and would have to leave. After a quick freak out, and a scramble to contact the company without cell service, our guide arrived. We had to taxi to the bus that was sitting on the side of the road waiting for us. Opps! You can imagine the stares we received as we boarded. 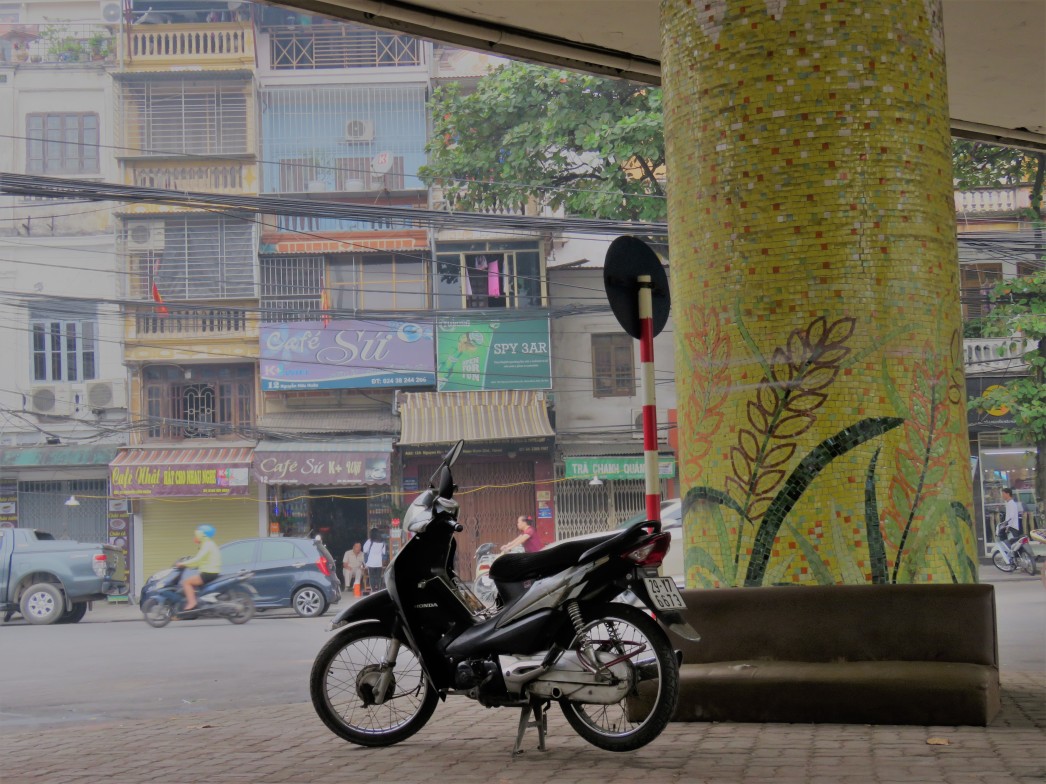 The ride was about 3-4 hours. A little bumpy, but I always enjoy being able to gaze out the window for hours in a new place with unfamiliar views. A few bumps was totally worth it, once we made it to the port and boarded our ship. Ha Long Bay is one of the seven new natural wonders of the world and rightfully so. With almost 2,000 limestone islands sprouting up all through the water. It is beauty unlike I’ve ever seen before. The islands were created around 500 million years ago from volcanic activity and earthquakes. We could not have had more perfect weather or a more comfortable temperature. It literally felt like Santa Barbara in May. It was a nice change from the extreme heat of Bangkok.

Side note: All the facts in the post are thanks to our awesome tour guide Jackie, like Jackie Chan as he would say. He was so cute, helpful and kind. He said “Ya” after every single sentence. I’m not sure why, but it is extremely funny when I was drunk and I couldn’t keep myself from laughing.

That evening we took a smaller boat out to what was basically a floating shack where we hoped into kayaks. It was crazy to see a family lived on this floating dock. Somehow they had electricity and were watching the movie “Pearl Harbor” on the flat screen. The had the two cutest puppies running around. I tried to tell myself they were pets, not food… but that probably wasn’t the truth. The water is really blue there, but not crystal clear like it would be in the Caribbean. The amount of trash in the water was the only down fall. It is this beautiful wonder, it should be taken care of. 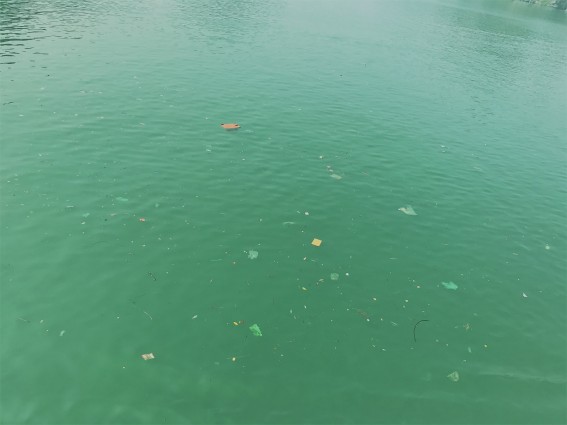 Once we were finished kayaking, we hoped back into the smaller boat. Jackie said if we wanted to swim he “prepared the lemon” in case anyone hopped in and was stung by a jelly fish. As you can imagine, everyone opted out of that. The jellyfish i saw look over the rail of the boat were bigger than my head.

The food on the boat was amazing!!! Like the best little fried spring rolls I’ve ever had. We had to be up bright and early the next morning (Again! I swear I will never get to sleep in over the next six months. All good though, I’ll sleep when I’m dead.) First, we stopped at Titop Island, which got its name from some Russian guy. Sorry, Jackie, I wasn’t listening for that part. We hiked 400 steps to the top. The view was totally worth the exercise. 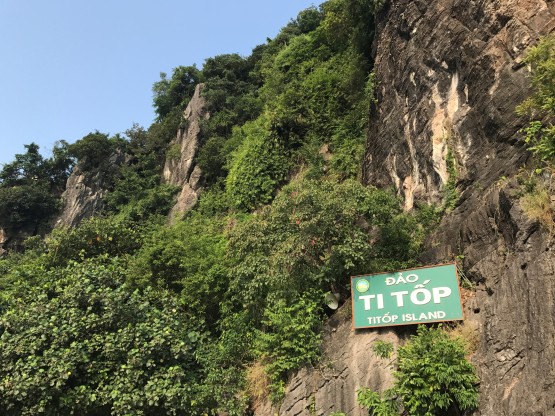 Next we headed to Surprising Cave which was discovered in 1902. I had been to caves in the U.S. like Cumberland Caverns in Tennessee, but this place was so big and magnificent, it put everything else I have seen to shame. 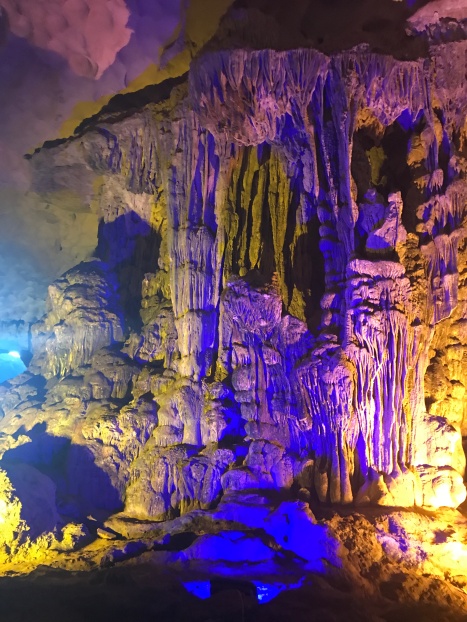 Later, we made our way to the private island we were staying on for the evening. A long dock lead us to our little bungalows, stilted in the sand. It was the U.S. version of glamping, which is what I am all about. We decided to head into Cat Ba with two Australian girls we had met and do some motorbiking. It was like 5 USD, to rent the bike for two hours. Everything in Vietnam was so cheap! Local beers were less than $1 a piece, which can be dangerous. Of course, the bike Hannah and I had was on E, so we had to stop at a “petrol” station. We drove through the craziness of Cat Ba, where I saw a restaurant that had dog and cat on the menu *tears*. Once we were more in the secluded area, it was truly a sight to be seen. As we rode up the hills you could feel the temperature completely drop. Everything was this intense green color with a backdrop of the soft blue hues created by the water and sky. 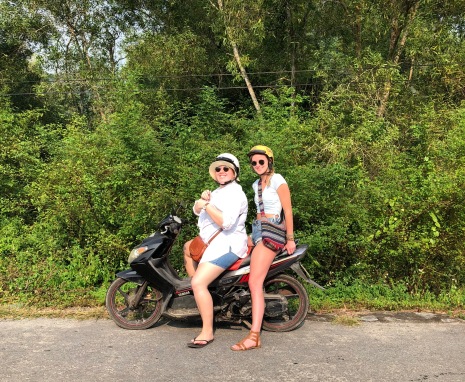 Soon, our group had been separated. We rode around thinking they had taken a different turn. After driving in circles, we were unable to link back up, so we just continued our ride. When 4 P.M had rolled around, we started to worry. We later found out our friends had taken a tumble and had to go to the hospital to get bandaged up and even stitches. The man we rented the bikes from was freaking out they were hurt, but freaking out even more than the bike was laying on the side of the road with the key in it. We probably should’ve choose the safer option and soaked up the sun on our little island, but this leads to a better story. Luckily, we were able to have our rental guy translate to our boat taxi back to the island what had happened and he waited for them to return. So nice! I know he was on a time schedule, but he waited for the other girls to make it back.

The water baby/beach bum that I am was sad to leave Ha Long Bay, but I was excited to see one last sunrise and get back to enjoy Hanoi! Hanoi was a crazy, hectic maze of bars and markets. It was easy to get lost in, but in a good way. After dinner, we discovered the coolest little night market. We headed back to the hostel to enjoy a few beers, ran into our new European friend then headed up to bed, for yet again another morning headed back to Bangkok.

Overall opinion of Vietnam: I ABSOLUTELY loved it there. Even with a few hiccups, I have nothing negative to say. I would definitely go back and recommend everyone take a trip once in their life! 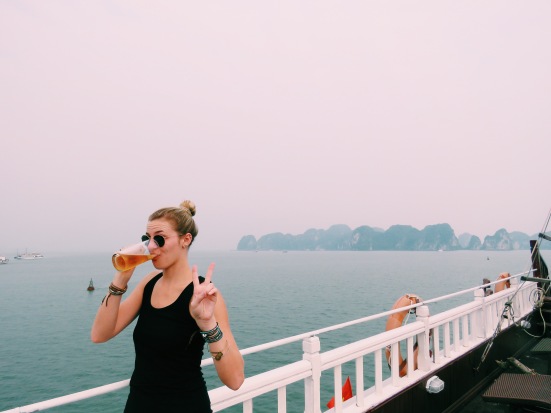 Two of my favorite moments. 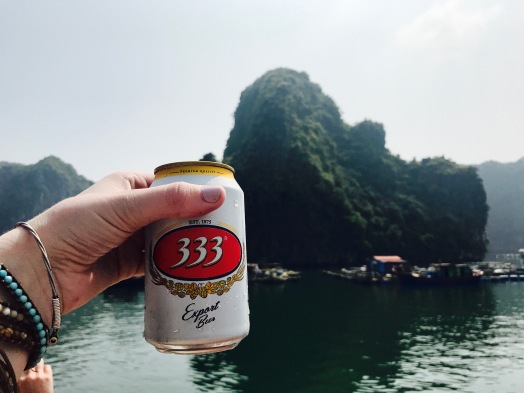 Now to the music!! Unrelated to my Vietnam experience, but I am super into this new guy Lauv. His weird advertisement constantly comes up on my Spotify constantly and says “Hey Asia, its Lauv.” So Hey America, here is Lauv! Enjoy.